The BTHome v2 format can best be explained with an example. First, the basics:
Bluetooth defines a single packet format for both advertising and data transmissions. This packet consist of four components: preamble (1 octet), access address (4 octets), Protocol Data Unit – PDU (2-257 octets), and Cyclic Redundancy Check – CRC (3 octets). If you want to learn more about the BLE format, you can read this). 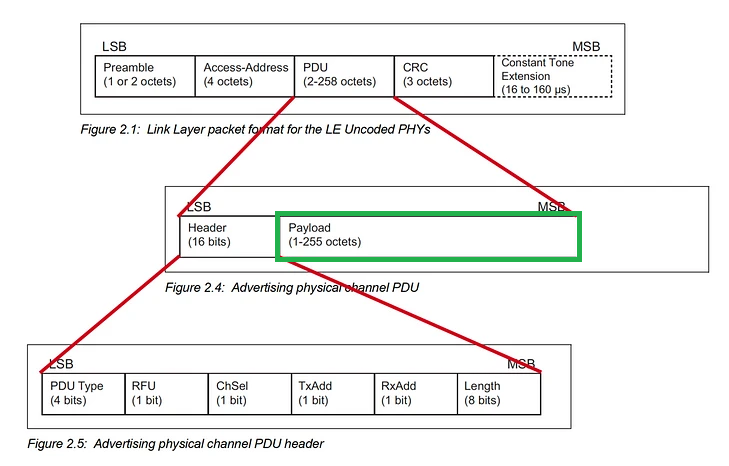 The advertising payload can consist of one or more Advertising Data (AD) elements. Each element contains the following:

The advertising payload in BTHome format should at least contain the AD element Service Data (16 bits UUID). It is also strongly advised to include the AD element Flags. Optionally, you can add a Local Name.


The flag value has several bits indicating the capabilities of the device. Although not required, it is still strongly advised to include this element in your advertisement, especially when using passive scanning on the receiving side. Bluez, which e.g. is used in the Home Assistant Bluetooth integration, won't be able to parse the data without this flags value. This part is always the same for BTHome (0x020106).


The service data contains the actual data. In the example, we have:

The BTHome (service) data contains the 16 bit UUID, the BTHome Device Information and one or multiple Measurements.


The UUID has to be read reversed per byte, so the UUID is 0xFCD2. This UUID should be used by receivers to recognize BTHome messages.

Allterco Robotics, the manufacturer of Shelly devices, has sponsored this UUID for BTHome and it's free to use for everyone with this license.


The first byte after the UUID 0x40 is the BTHome device info byte, which has several bits indicating the capabilities of the device.


Object ids have to be applied in numerical order (from low to high) in your advertisement. This will make sure that if you have a device (sensor) that is broadcasting a new measurement type that is added in a new (minor) BTHome update, while your BTHome receiver isn't updated yet to the same version, it will still be able to receive the older supported measurement types. A BTHome receiver will stop parsing object ids as soon as it finds an object id that isn't supported.

Multiple measurements of the same type

Binary sensor data should always be an uint8 of a single byte. Its value should be 1 for on, and 0 for off.

Devices can also send events. Events are a combination of a device type (like a button or dimmer) and an event (like "press" or "long press" or "rotate left 3 steps"). Note: Events are not yet supported in Home Assistant.

Multiple events of the same type

Similar as for sensors and binary sensors, you can also send multiple events of the same type, by just adding them behind each other. The event `0x00` (None) is a special event that can be used in case you e.g. have a device with two buttons, and you only want to send an event for the 2nd button. An event 3A003A01 will send no event for the first button, and an event "press" for the second button.

The packet id is optional and can be used to filter duplicate data. This allows you to send multiple advertisements that are exactly the same, to improve the chance that the advertisement arrives. BTHome receivers should only process the advertisement if the packet id is different compared to the previous one. The packet id is a value between 0 (0x00) and 255 (0xFF), and should be increased on every change in data. Note that most home automation software already have some other filtering for unchanged data. The use of a packet id is therefore often not needed.

Unencrypted BLE advertisements can be read by anyone nearby listening for Bluetooth packets. BTHome supports AES encryption (CCM mode) which works with a pre-shared key. When encrypted, the data can only be read by knowing the encryption key. The encryption key should be a 16 bytes long key (32 characters).

More detailed information about encryption in BTHome is given on this page.